FINAL WEATHER POST FOR THE SEASON- RECAP OF SNOW STATS (WHO SAW THE MOST SNOW), QUARANTINE POWDER ALERT CASCADES AND TETONS

This is the final post for the 19/20 season. Unfortunate circumstances, but certainly the right calls have been made to close all ski areas. While resorts are closed, there have been mixed messages on uphill travel with some spots still allowing it. The bottom line is that if you get hurt, you're going to tax the hospital system so use common sense! There were some large skier triggered avalanches this last week in Utah (Snowbasin and backcountry near Alta). This Powder Alert is purely broadcasted for both living vicariously through the next big dump or in some areas just getting outside to engage in some safe fun time in the snow. Social Distancing is essential! Please respect your local jurisdicational restrictions and never venture out if you are not felling well. The challenge with COVID is symptoms don't dictate whos a carrier. Lets move on to the forecast and a recap of the 2019-20 season.

I am including many maps of snowfall YTD to see who scored the highest numbers in the West. Next season will likely bring changes how we congregate at ski areas, lifts, etc. My optimism is that you will all be riding powder next year! Will it be deep? Yes! Our forecast usually includes deep snow in the headlines. I provide praise to what seemed like the most difficult choice in history for Vail Resorts (1st to announce closures) quickly followed by Alterra for closing down all ski resorts, even as the deepest storm of the year was hitting the Sierra. While shock rolled through the industry, it was the right decision. That weekend saw over 100 inches of snow for some spots of the Sierra. That decision most likley reduced the spread of CV and will have you coming back for waist deep powder next season.

Vicarious/Quarentine Epic Alert: Significant snowfall is going to be impacting the Pacific Northwest especially late Sunday into Monday. The northern Cascades will reap moderate snow initially that spreads south Sunday night. Heaviest snow Sunday night and Monday will favor the Southern Cascades of Washington and northern areas of Oregon. Moderate snow will continue for the North and Central Cascades of Washington. Expect 14-20 inches for many areas by late Monday with unseasonably cold temperatures. Ironically, this might be one of the colder deeper storms of the season (Quarantine Epic Alert). Live it vicariously and think of the last faceshot you had this season! This storm will be cold, so think back to one of your better days of the season.

That system will bring decent snowfall to central Idaho and eventually the Tetons Monday PM to Tuesday (12 plus). Lighter snow trickles north into Montana, and northern Utah.

Below: Total snowfall through Wednesday for the West (Do not chase). All resorts are closed in the PNW including uphill traffic. Northwest Avalanche has stopped forecasting for the season. Jackson area is under travel restrictions.

Best Chases of the seaon:  It’s hard to think back to the single best day.  Scoring 12-15 inches at Crystal in January followed by a late night flight back to Salt Lake City. From there it was the deepest day of the year at Snowbird with 28 inches of fresh with Little Cottonwood closing by 10AM (Bonus). Other notable winners were a day storm in Wyoming with 12 inches at Targhee (No crowds), and a sneak up powder day at Jackson. The sneak up storm had 2-3 inches on the snow report with 18 inches by the end of the day. That chase started in Idaho Falls and was purely luck based on webcams and telemetry (The models did not have it). In Colorado we all remember the 3-4 feet that dumped along i-70 closing highways in February. Drove until 3AM on Friday with i-70 closing and reopening. Day 1 of that storm cycle was the let down with wind impacted dense snow (Point it straight) and lots of terrain closures at Vail. Day 2 had the mass exodus from Denver (those insane lift lines) that we fortunately stayed at home.  Day 3 was the $$ with addtional snow and new terrain openings at Vail (No lift lines). Was able to catch rope drops for Genghes and Red Square and bolted to Breckenridge for the opening of Whales Tail (One of my favorite lines at Breck). Most of Denver stayed home that day.  Biggest Bust of the year:  Lake Tahoe chase as resorts closed for the season (The right thing to do) watching 5-7 feet fall in 3 days (Like the carrot hanging on a stick).

Below: Powderchaser Steve hitting a bluebird day in Boulder beneath the Flatirons March 21, 2010.  Disclaimer: We don’t suggest this per the rules but this recent day could not be missed with bluebird Flatirons and deep snow (SHHH).

Below: Mount Baldy just outisde Los Angeles grabbed a whomping 3 feet in 48 hours.  Powderchasers had 1st chair followed by a 2 hour lift line for the 2nd run. No other resort all year had lines like this (Double chair).  All of LA was there?

Let me end the season with a look at some data I pulled from the National Resource Conservation Service (NRCS).

This season showed Neutral conditions for most of the west (Neither a strong signal for El Nino or La Nina). We originally felt that all regions of the West had an equal chance of having a decent winter. The season started out very slow for the Pacific Northwest with lots of rain in November and December that suddenly took off as midwinter rolled in. The PNW ended up near to slightly above average especially in the North Cascades. Whistler went from nearly no snow to decent conditions by January.  Meanwhile in the Rockies Montana started the season with a bang with snow focussing further south into the Tetons during the midwinter period (JHMR and Targhee had deep snow by early December with much less below 7000 feet). Generally warmer conditions in December created some large variables on snowfall depending on where you chased. Meanwhile, Utah and Colorado stayed near normal throughout the season with generally a good year. There were many opportunities to chase powder especially in the southern regions for November. Arizona who may be the ultimate winner from the maps below, scored cold blower for Thanksgiving where 20-35 inches fell at the Arizona Snowbowl. They already had a decent base before that storm. I blew it and missed this storm! The Sierra, had some decent storms early in the season followed by a complete dry spell mid-season. California plates were evident in the Rockies for many of the holiday periods in January and February. That all changed for the Sierra as March rolled in with some areas reporting over 100 inches at the summits as resorts began closing for COVID. Interior BC scored deep powder early to mid season with many resorts riding full terrain by late December (Warming periods brought increased avalanche danger, especially for New Years).

Lets look at the the year to date Snow Water Equivelent for many States in the West. This is the amount of water in the current snowpack (Melted water). It is interesting how with a neutral year (Equal chances of average snowfall for the West) most areas ended up near or slightly above normal (The season technically would not have ended so these numbers can change). I believe we initially said everyone has an equal chance of a near normal winter. The Sierra came up short this season with perhaps the desert Southwest being our winners (Utah and Arizona).

Below: The Sierra sits below normal currently. Areas further West or along the Crest are most likely higher than the map depicts. 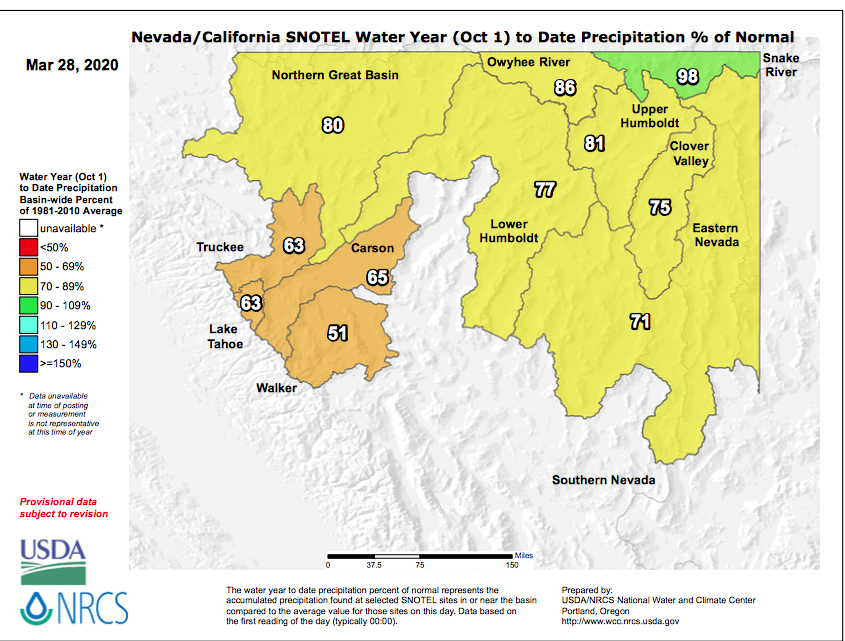 Below: Arizona scored deep Desert Pow this season. The Snowbowl outside of Flagstaff sits in the San Franciscio Peaks Range where abover average snow fell this seaon. Areas further south saw even higher amounts of moisture. The Verde River Basin south of Flagstaff at 131%! 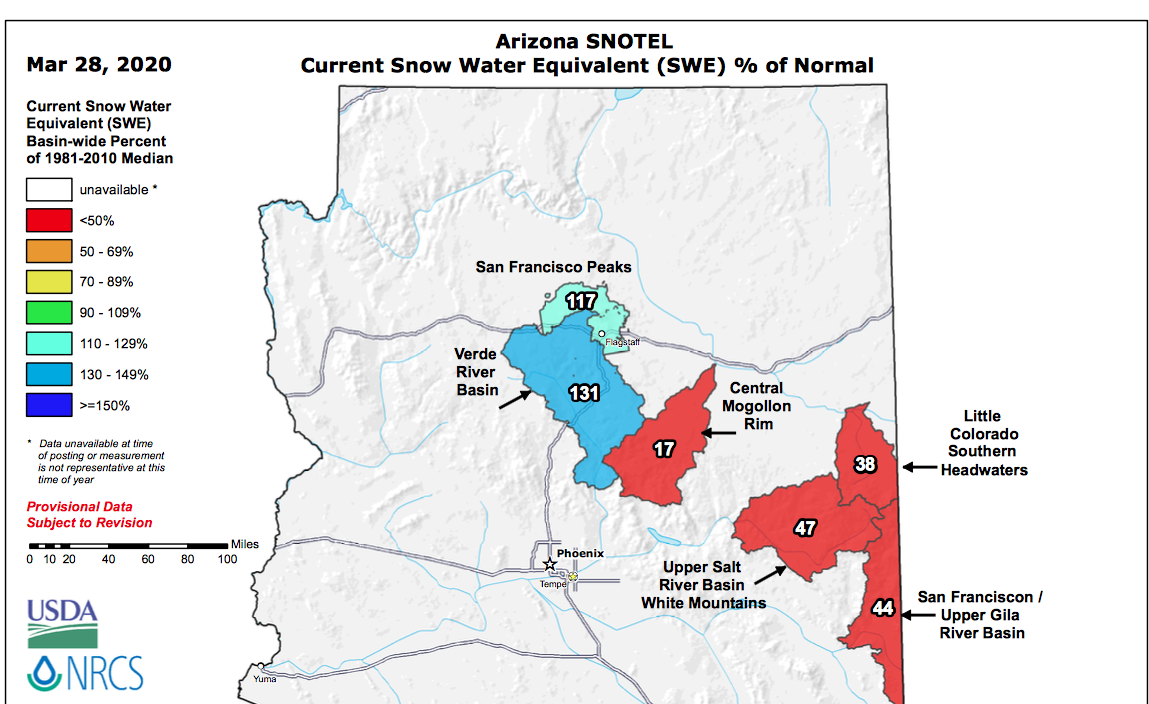 Below: The Washington Cascades who started out with a bust ended this season with just above normal snowpack slightly favoring the Northern regions. Oregon had less. Both areas will score 12-20 inches next week improving these numbers. 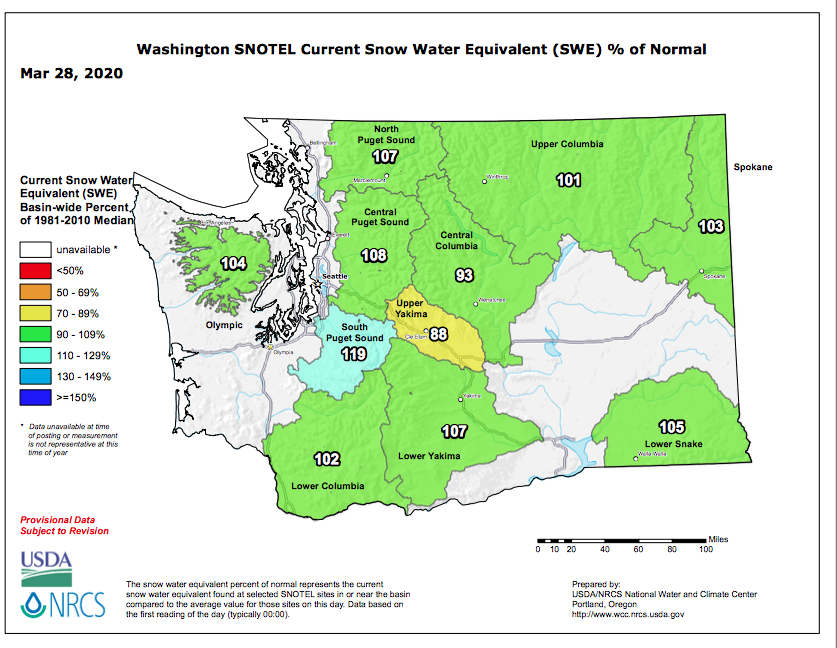 Below: The Western mountains of Wyoming ended the seaon at 108% of normal.  Season generally saw multiple events started out warm (Novmeber/December) and trended colder brigning better snow to lower elevations late December or early January. You can see Jackson Snake River Plain near the 108. 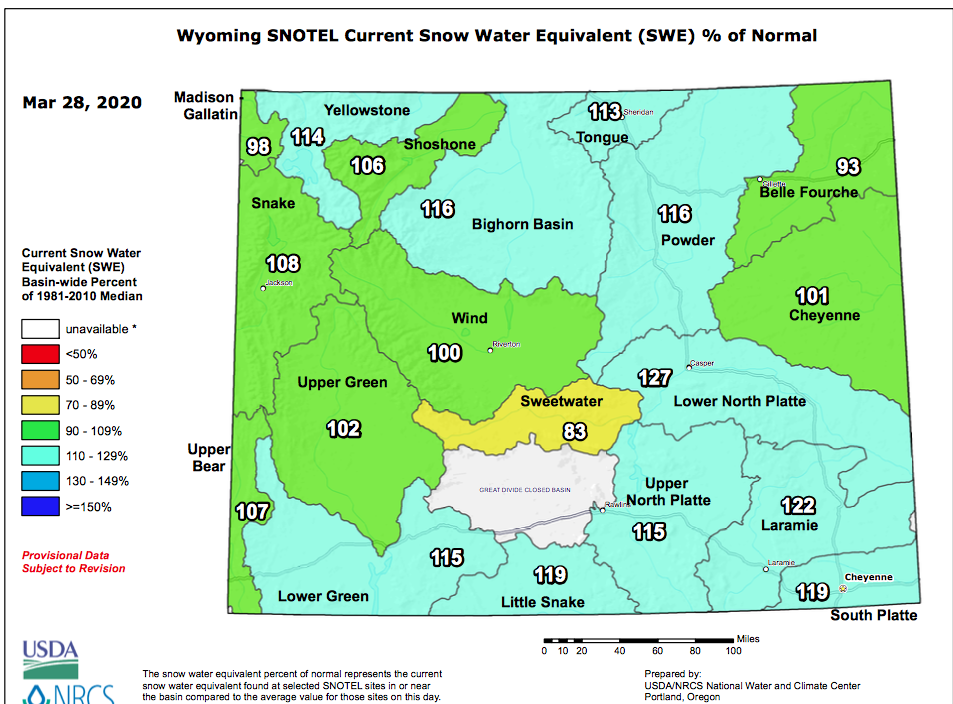 Below: Near normal snowfall for most of northern Utah with much higher amounts of water for the southern regions. Slightly below normal for the northern Wasatch (Snowbasin, Powder). 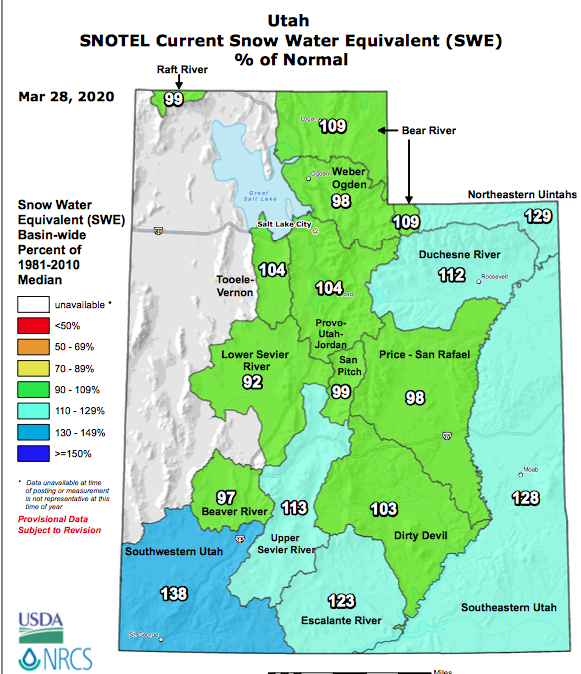 Below: Slightly below average to normal for the Sangre De Cristos in New Mexico 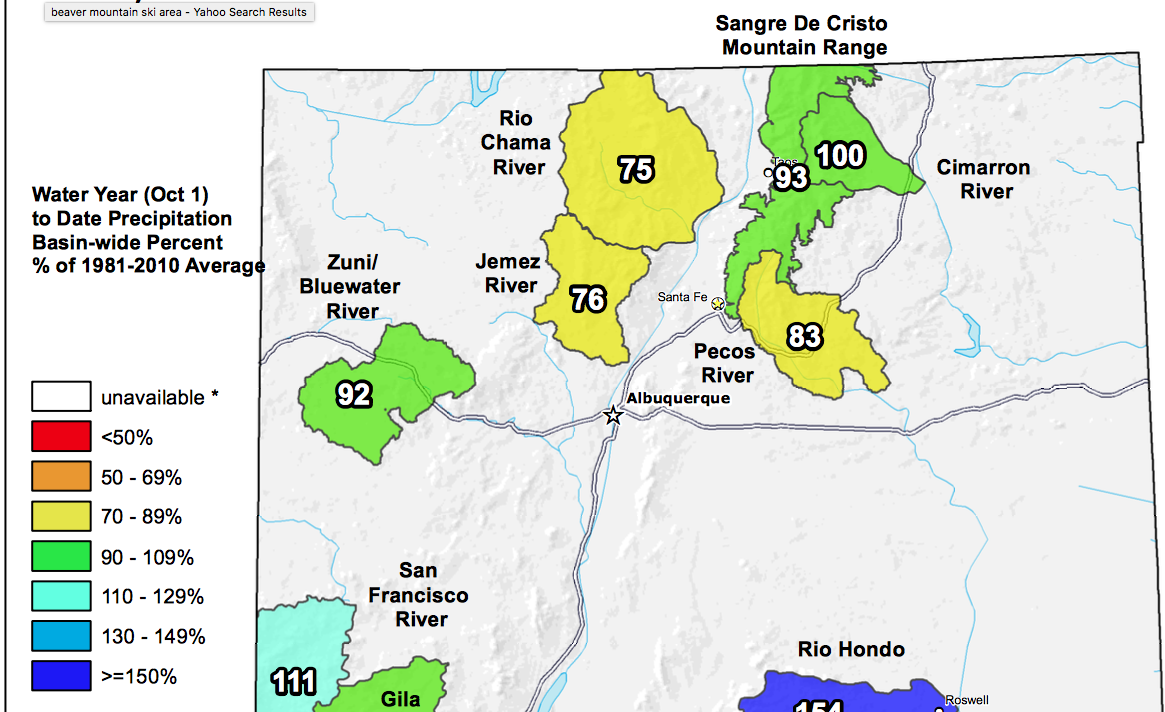 Below: Montana ranges from 112% near Whitefish to 100% of normal in the Madison Ranges (Big Sky, Bridger). The upper Yellowstone Basin (Red Lodge Mountain) is at 115% (Saw many sneak up powder days this season). NE winds were common this season that pushed more moisture East into the areas in light blue from Glacier National Park to East Yellowstone. 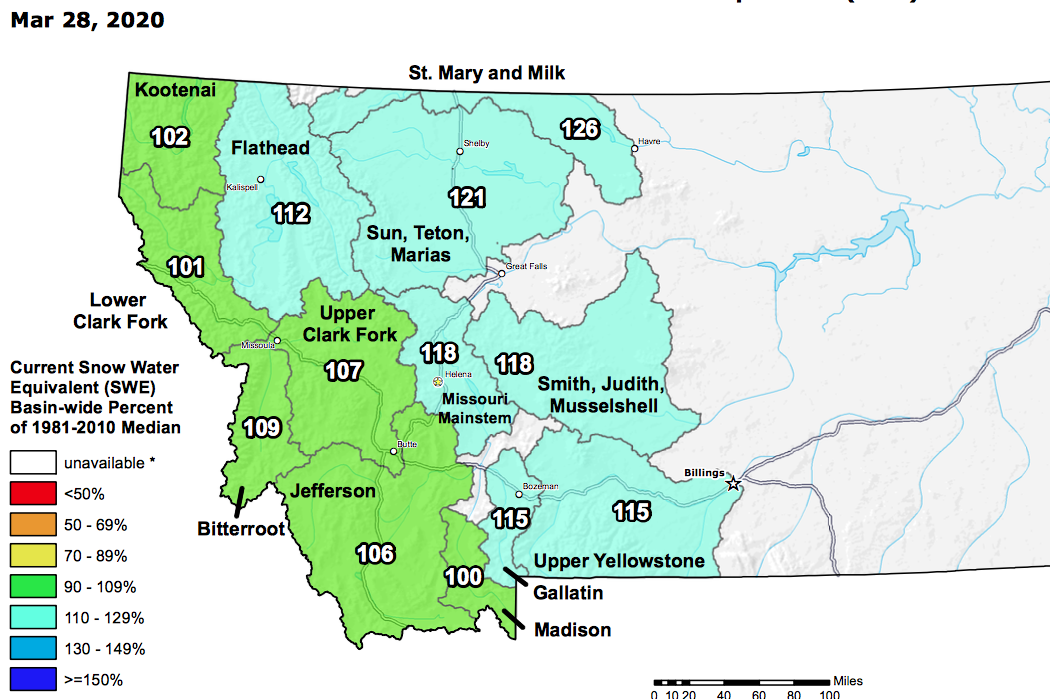 Below: Colorado sits above average along and north of I-70 (Aspen included) and near normal in the central and southern mountains. 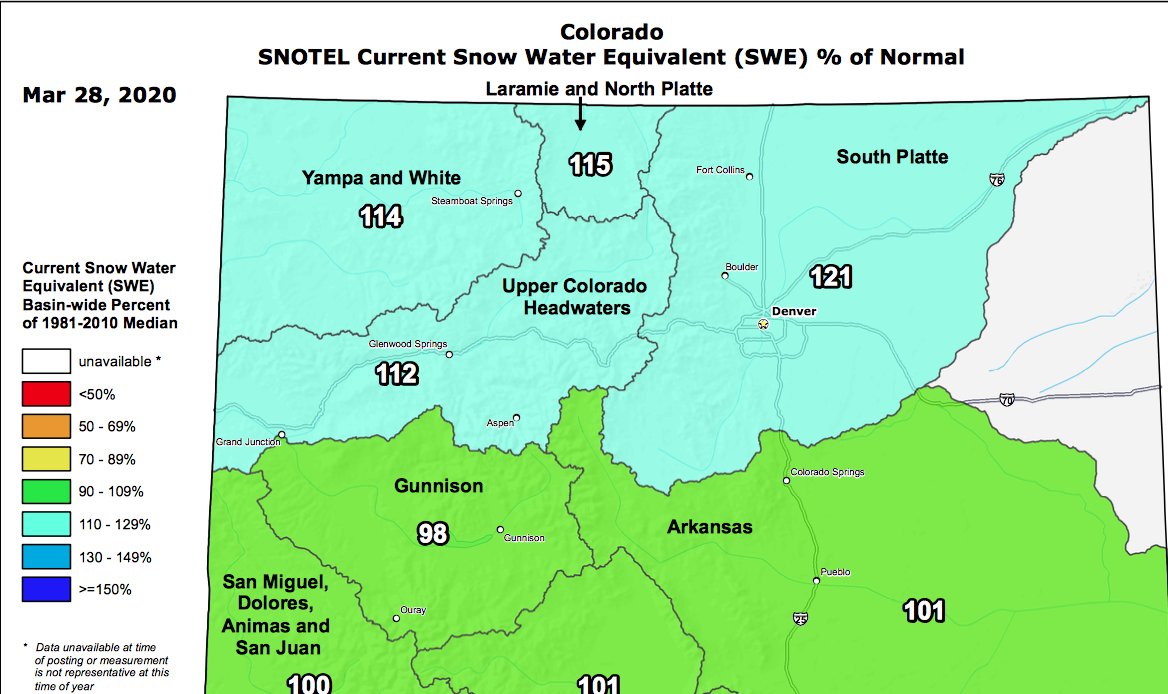 Below: Summary of the West with a good even spread of near average water content to slightly above for many mountain ranges. Lower amounts noted for Oregon and areas south into the Sierra. 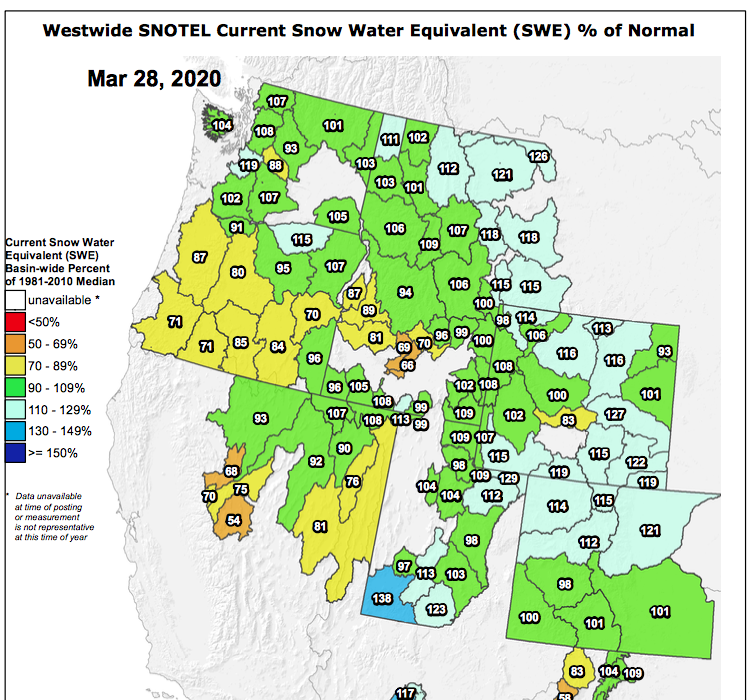 Please feel free to donate to Powderchasers to continue our forecasts for next season. We will take 20% of all donations and contribute them to a COVID cause.  You will be notified with the specific cause that we choose or feel free to email us with some suggestions. We would rather support First Responders, front line hospital workers rather than manufactures. Thanks to all of our sponsors SNOSHARK, IKON, Ski Ride Tours, Beaver Mountain, and ULLR for thier support. Please visit their websites for additonal info.  We endorse all of these sponsors! They have been great partners to work with.

I will use this section to sign off for the season!  Lets begin, by staying healthy! I am a proponent for some outdoor activity. Use common sense and dont' end up being the headlines for a backcountry rescue! Keep your Knar factor lower than normal. Avoid the backcountry without proper knowledge. Avoid the backcountry in areas that have stay at home orders. You might want to avoid the backcountry all together. Some resorts have uphill travel posted on their websites (That is an individual decision). That might mean staying inside or limiting your fun to hikes or even walks. I have never seen so many folks walking dogs in my neighborhood in Park City (Dogs are loving this).

Next season hopefully will offer many deep days.  I am not not sure how lift operations will be impacted with COVID but suspect changes will take place next season. Do all the right things now, and we will be better off long term! COVID hit us in March, Imagine if ski areas closed in January! Think optimistically. It could have been worse. Support your local Fire/EMS/Nurses/Doctors who are all short of suppies. Donate Blood!

Please support Powderchasers by either joining the powder concierge or making a donation for our powder forecasts. The Concierge gets you custom chase forecasts and travel tips. The donations are used to support our forecasts.


Get a 10 day powder forecast and an email before a big storm!

Get in touch with us!

We combine 35 years of experience forecasting and chasing powder to provide forecasts that help you find the deepest snow.

Sign up to get powder forecasts in an email before a big storm!

Did you know that we offer custom forecasts and trip planning? Sign up for mid level and higher powder concierge and receive benefits through this season!
Click below to find out more!

More Info Got It!