For chasing powder, requests from first responders and community leaders to communicate that they do not want a lot of people coming to town and definitely don’t want to deal with potential snow-related injuries when their focus should be on COVID-19. There is a mandatory travel ban for much of Colorado (Denver, Boulder) that prohibits any nonessential travel. At the very least, please be extra responsible and cautious so that you’re safe and do not cause a burden to healthcare workers. I do not suggest this means to not consider some outdoor activities but just use extra precaution and good common sense. Parks around Denver remain open. Also, stay inside if you feel sick!  I am a proponent for outdoor activities if you are healthy just for your sanity or mental health. All nonessential travel should be avoided.

I am likely to post periodically in the next few weeks before ending posts in April. That might change if travel bans begin to ease but I am not optimistic. Believe it or not, there are still a few ski areas open (Lookout Pass- Idaho, and Teton Pass Ski Areas). Deep powder in the next few days will all be focussed on both the Wasatch and Sierra. The Sierra will peak Tuesday night into Wednesday with 12-15 inches at the peaks along the Crest. Northern areas will see higher amounts than the south.  Lower elevations will be in the 6-12 inch range. Snow will taper on Wednesday. If COVID had never happened, we would all be grabbing first chairs Wednesday (Dreaming).

The Wasatch begins to see snowfall Tuesday (Light) that increases in the evening. A weak cold front will stall over the northern portion of Utah perhaps enhancing snowfall for the Northern and Central Wasatch ranges (Logan, Ogden may be favored initially and eventually impacting central areas towards the Cottonwoods). Moderate snow intensities will decrease somewhat Wednesday morning (Slight easing of winds) before increasing again late PM to Thursday morning. SW winds are likely to feed higher amounts of snowfall for Big Cottonwood but LCC won't be far behind for Wednesday.  It's also possible the northern Wasatch including the Idaho border land higher amounts early Wednesday.  Snow levels will be near 5500 feet. Road impacts in the lower Salt Lake Valley are unlikely to be an issue on Wednesday.

Wednesday night ushers in slightly cooler temps and migration of SW winds veering a bit more West. Valley snow is likely (2-5) with some road impacts near Salt Lake City.  Parleys Canyon will see higher impacts to Park City (5-10).  With the cooling temps Wednesday night, Thursday will bring lower density snow and an additional 5-10 inches.  While there is no single peak of 2-3 inches per hour snowfall, steady moderate snow for 48 hours should land 7-11 for Wednesday another 7-11 for Thursday for the highest peaks of the Wasatch. Park City is likely to benefit somewhat with SW winds extending into Deer Valley that might bring some uptick surprises.  Bottom Line: 14-22 inches or more above 9,000 feet for many mountains. Big Cottonwood or areas North of I-80 might have higher amounts early Wednesday than LCC but it's going to be close.

The models yesterday showed a deep storm for Colorado near the Front Range late week.  Today, that has backed off significantly with the exception of the GFS that still shows decent totals from Boulder North. The likely scenario is that 3-6 inches fall West of the Divide with NW winds Friday. Snow will wean Friday night. The highest totals by midday Friday are likely to be near Rabbit Ears Pass extending into the northern sections of Rocky Mountain National Park. Boulder is a wildcard (If parks are open, you might be able to cross country ski late Friday and Saturday). New Mexico is a wildcard with this storm with some models showing 5-7 inches near Taos by late Friday. Other models show much less.

Below: The American Model is the most bullish for Colorado showing 4-7 inches for most mountains along I-70 and higher amounts perhaps near Rabbit Ears of the northern sections of RMNP (Closed). Boulder is also highlighted along the Front Range. 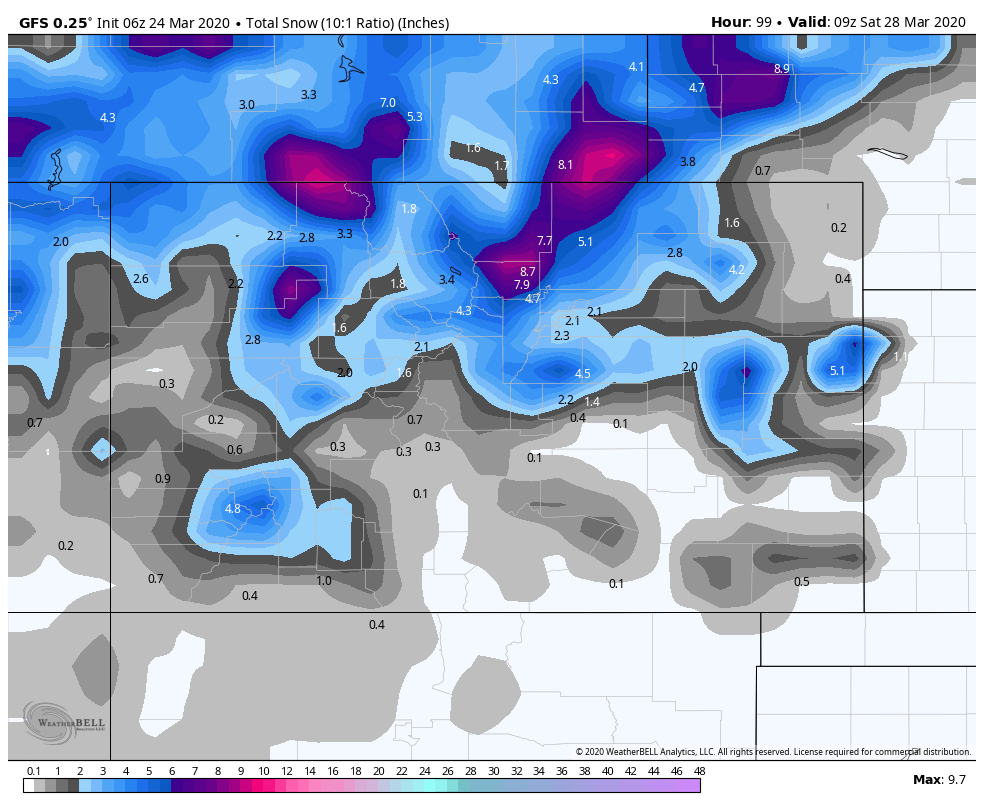 Honorable Mention: The Cascades grab a very cold storm with 4-9 inches likely in many areas. Snow levels drop to 1500 feet. Dreaming once again!

Below: Deepest powder likely in the Sierra, Wasatch followed by the Cascades and Northern Colorado through Saturday. 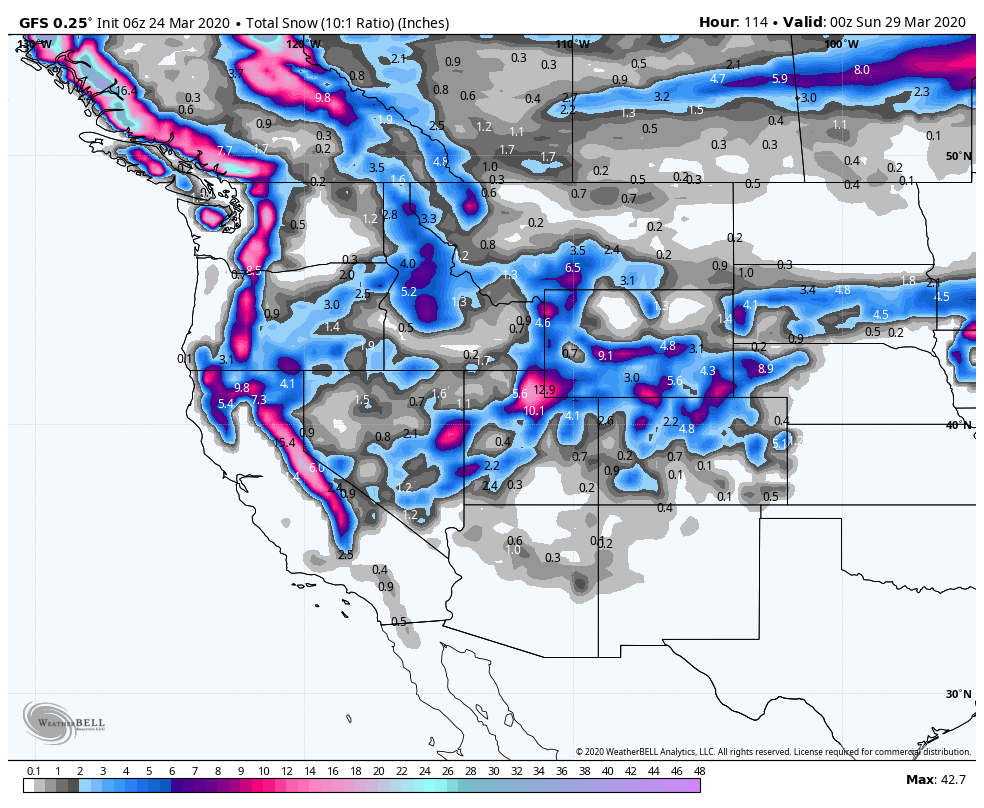 Powderchaser Steve - This is a very difficult time for everyone but we will get thorugh it!

Please support Powderchasers by either joining the powder concierge or making a donation for our powder forecasts. The Concierge gets you custom chase forecasts and travel tips. The donations are used to support our forecasts.


Get a 10 day powder forecast and an email before a big storm!

Get in touch with us!

We combine 35 years of experience forecasting and chasing powder to provide forecasts that help you find the deepest snow.

Sign up to get powder forecasts in an email before a big storm!

Did you know that we offer custom forecasts and trip planning? Sign up for mid level and higher powder concierge and receive benefits through this season!
Click below to find out more!

More Info Got It!